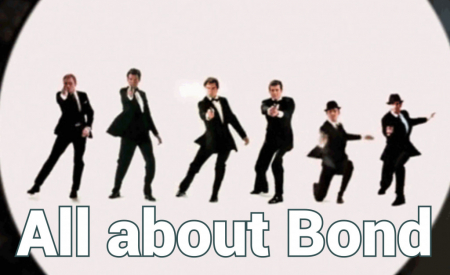 Alternately played by Sean Connery, Roger Moore, Timothy Dalton or George Lazenby, James Bond has been the subject of no less than twenty-six film adaptations, twenty-seven today with the recent release of No Time to Die with Daniel Craig (who has just inaugurated his star on the Hollywood Walk of Fame!). According to Steven Spielberg, Craig is the perfect 21st century Bond, and the most formidable 007 agent since Sean Connery for Peter Jackson. On this occasion, Posterissim offers you a (non-exhaustive) look back at a saga that has not finished to fascinate all generations, through some of its most emblematic posters.

The original posters of the James Bond films form a sumptuous iconography, a witness to both history and history of graphic design and advertising art. But above all, they bring together the essence of the myth created by Fleming's character: elegance, seduction and adventure. Dark or colorful, minimalist or hyperrealistic, they are illustrated by the greatest: Robert McGinnis, Frank McCarthy, Bob Peak, Jean Mascii, Boris Grinsson, Yves Thos...

Also known as 007, James Bond is the most famous secret agent. The character came to life in 1953 in Jamaica, under the pen of the former British spy Ian Fleming. Produced almost entirely by EON Production, the James Bond saga began on the big screen in 1962 with Dr. No. Harry Saltzman and Cubby Broccoli produced the first Bond films together and formed a perfect tandem. Saltzman believed in the Show and did not take the idea lightly.

That year, audiences were introduced to the film franchise that would conquer the world with the poster for Dr. No. The use of painted illustrations, similar to those on the novels, promised a real escape. The laconic James Bond posing in a tuxedo, gun and cigarette in hand, already embodied the universal charm and casualness of the secret agent. In all countries, the best poster artists of the time were called upon to produce the posters for the first James Bond movie, which were to become iconic. Mitchell Hooks created the first teaser poster, and his illustration served as inspiration for many of his colleagues. In France, Boris Grinsson delivers a magnetic poster, full of elegance and panache.

Terence Young directed the first James Bond film and everyone, including Broccoli, always admired his vision: Young had both class and culture, but above all, he knew how to work with Sean Connery and brought out the great traits of Bond's personality. In Dr. No, the scene in which the actor, with a cigarette in his mouth, utters the famous phrase "Bond, James Bond" is one of the most emblematic of the series. On that day, Connery captivated the audience, defined the character on screen, and Bond's dialogue became a classic. This line, with its unparalleled simplicity, sums up everything we've come to expect from James Bond: danger and sophistication. Sean Connery had the perfect physique for the role : distinguished and approachable enough to shape the character in a way that was right and close to the viewer.

For the second film, From Russia with Love, released in 1963, the preventive British poster designed by Eddie Paul and painted by Renato Fratini, once again set the stage for what would be seen in other countries: a disquieting Bond, a sensual and exotic atmosphere and promises of adventure. Bond's pose, holding a long-barreled gun, becomes one of the most instantly recognizable Bond images. In contrast, the American poster campaign was more informative and commercial: David Chasman, marketing director at United Artists, delivered explosive photographic models with punchy and enticing text.

Producers made one film after another and the iconography of James Bond continued to evolve. For Goldfinger in 1964, the French campaigns remain in the painted style of the first two films, while elsewhere it turns more to the innovative approach of photography, inspired by the credits shot for the film. The representation of the sensual and mysterious as well as morbid image of Margaret Dolan's gold-covered body (Dink) was a challenge for poster artists at the time.

Moreover, a Bond film would not be complete without a pre-credits sequence, and it is precisely the one from Goldfinger that is still referred to today as the perfection, the one to compete with. These first few minutes alone represent mini-movies. Bond films are the precursors of action films, and even the opening sequences feature incredible stunts. For example, the opening sequence of The Spy Who Loved Me is one of the most spectacular, with a ski chase and Bond jumping off a cliff.

Let's not forget to mention that the car is a key element of the James Bond films. Every time we see a Bond movie, we ask ourselves the same question: what will be the next Bond car? Steven Spielberg, whose favorite film is Goldfinger, even confessed that he owned an Aston Martin DB9 only because of James Bond!

Following the success of the movie, the main poster of Thunderball the following year in England and the United States assures viewers that everything they liked in the first three films will be there: exotic action, incredible girls, memorable lines, crazy gadgets... The poster even announces an even more ambitious Bond : "The greatest Bond ever", and the 007 logo is integrated into the campaign tagline ("Look up, look out, look down"), with an intelligent and innovative graphic use.

For the British poster, Robert McGinnis presents a new version of Bond, who swaps his tuxedo for a diving suit and flippers, and his gun for a harpoon. The campaigns for Thunderball are, as always, evocative of the adventure story and sometimes even look like a comic book. Frank McCarthy's illustrations show us an impeccable Bond with his jet-pack. In both cases, one of the key elements of the movies appears on the posters : humor, which is essential in James Bond. Bond is constantly facing life-threatening situations, and one way to overcome his fear is to laugh. Bond must always be perfectly at ease and intelligent, but also have a sense of comedy and mischief in his eyes. The role requires a certain aristocratic air, being funny, wicked, romantic, and to move quickly from one emotion to another. It is a character as complete than complex.

It is again the famous duo formed by McGinnis and McCarthy that designed the posters for You only live twice in 1967, mixing adventure and humor in a typically Bondian way. The film's logo, with its clever and creative repetition of the word "twice", follows the line of the previous film's posters with an elegant and eloquent graphic experimentation.

The main illustration shows Bond, with his inimitable and inscrutable expression in the so-called "bath scene", in the care of sculptural young women in bikinis. The image is deliberately suggestive, even saucy, and reflects the sexual liberation of the sixties. The campaign was also marked by the posters known as "Little Nelly" (in which Bond flies without his hands!), and these two themes were to be repeated in the variations seen in other countries. Only the Italian poster stands out for its striking minimalism, and has the particularity of showing a left-handed Bond.

One of the most memorable gadgets in the Bond series is the "Little Nelly" gyrocopter in You only live twice. The device, which was not created for the film but already existed, is provided by the Lieutenant Colonel of the Air Force Ken Wallis. He is the inventor and he is even the one who flies it in the film, the close-ups with Sean Connery being shot in the studio.

Now let's jump back in time to 1971: signed by Robert McGinnis, famous for his impossibly beautiful women, the Anglo-American posters for Diamonds are forever bring Bond back in grand style : Sean Connery makes his return and with him, his legendary pose that immediately identifies him. The 1969 moon landing is still present in the public's mind, a godsend for the artist who delivers a poster with a strong space theme.
After having left the star to George Lazenby is On Her Majesty's secret service, Connery puts back the tuxedo of Agent 007 on. The poster, a superb visual very seventies, is completely in the image of the film: atypical, kitsch, excessive and explosive. The artist's style is marked by the sensuality of female figures, so it is not surprising to find his drawings on the posters of many James Bond films on which he is surrounded by his famous James Bond Girls: Thunderball, Casino Royale, On Her Majesty's secret service, You Only Live Twice...

About women in James Bond, it should be noted that Fleming imagined complex characters who in the books are anything but ordinary. They are very modern and embody their time and in the films they evolve with their time. They gradually become experts in sectors previously almost exclusively dominated by men. Obviously always sublime, they also (and maybe even especially) have a lot of character. In the end, the Bond girls are not always a reflection of the machismo that is sometimes attributed to the saga; they know how to embody figures of power and emancipation in the same way as the male roles.

In James Bond, the "secondary" characters are actually not so much. It is often said that the film is only as good as the villain, which is why Bond must have a worthy adversary who is able to make him vulnerable. Also, the films fascinate internationally because the villains have a worldwide agenda. Only Goldeneye is an exception: 006 does not want to conquer the world, it is a story of betrayal.

Lone hero, the British spy is fast becoming an icon of popular culture, and the original vintage James Bond posters are a perfect reflection of the mood of his films and his inimitable class, as well as a mirror of an era. Action, sculptural young women and black tuxedos, they soon display a unity of style that becomes cult in its turn. Sometimes accompanied by a glimpse of spectacular stunts or exceptional sets, these original vintage posters play a full part in the creation of the James Bond myth. Strong images are associated with Bond and immediately evoke him: his silhouette, the 007 logo, the barrel of the famous Walther PPK...

From the early enthusiasts to the younger generations, neophytes and specialists, the James Bond movies have crossed history and continue to fascinate. Whether you're a fan or not, you never miss a new James Bond movie.

As you may have noticed, Posterissim takes great care in describing its original vintage posters. To learn more about the history of the movies, the production, the illustrations, the credits or to read anecdotes about the shooting, we invite you to visit the "Learn more" sections of the posters available on our website !

Original vintage posters about James Bond 007, films, exhibitions or festivals, are part of Posterissim's specialties. Find them in the dedicated category by clicking HERE. The website only presents a part of our collection, so do not hesitate to contact us for any particular request.

In the meantime, tell us in comments what you thought of this article, while we prepare our next Reel on Instagram with You-Know-Who as the star ;)