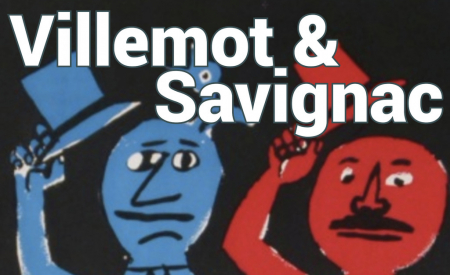 Raymond Savignac and Bernard Villemot are undoubtedly two of the greatest names of the French poster art of the second half of the 20th century. Timeless artists, both began their careers in the 1930s and are today considered true translators of their time. And what an amazing time it was! The spirit is carefree during the "Trente Glorieuses" and consumerism is in full swing, a golden opportunity for poster artists to spread their talent through advertising. Orangina, Bergasol, Bic, Bally or Air France, Bernard Villemot and his friend Raymond Savignac shared the campaigns of the biggest brands of the time.

It is certainly possible to say that they are as similar as they are different. They obviously shared a palette of bright and cheerful colors, but above all a vision of drawing marked by an effective and inimitable simplicity that they each illustrated in a different way.

With Bernard Villemot, the graphic simplification is quite remarkable. The image is limited to flat tints of color and an almost abstract line, yet manages to convey all of the brand's messages. This is particularly evident in his famous poster for Perrier, which could be described as the peak of his art.

Savignac, "the man who makes the walls smile and the paper reflect", used more humor to convey the advertising message, in a vocation of complicity with the spectator.

Marked by sensuality and elegance for one and childlike spontaneity for the other, the styles of the two artists come together in an apparent lightness, a simple and refined line and the removal of everything that is not essential. Indeed, if they did not necessarily have the same way of doing things, Bernard Villemot and Raymond Savignac share a telegraphic vision of communication. The notion of immediate reading, simple graphics and undoubtedly a touch of cheerfulness mark the thousands of posters produced by these two monuments of the French poster.

The two artists met in 1948. Savignac was invited to work in Villemot's studio and in the spring of 1949, they shared an exhibition at the Maison des Beaux-Arts. It was there that his poster for Monsavon was noticed, and his career took an unprecedented turn. He will say about it: "I was born at the age of forty-one, from the udders of the Monsavon cow". Bernard Villemot and Raymond Savignac worked together, but were also friends. The story tells of the origin of Raymond Savignac's emblematic moustache: while making the poster for their joint exhibition, Savignac had the idea of growing a moustache and representing himself with it, before finally never parting with it.

In the 1970s and 1980s, they were both rejected by the advertising world, not favoring efficiency over artistic work. Villemot will say on this subject: "We poster artists, we were forced to go underground. The country was occupied by the armies of marketing". Their colorful, deeply understandable and obvious posters are now part of the French heritage.

Find the most beautiful posters of Bernard Villemot and Raymond Savignac in the sections dedicated to the artists on our website, and do not hesitate to share and comment this article !